The Jaguar XK120 is a sports car manufactured by Jaguar between 1948-1954. It was Jaguar's first sports car since the SS 100, which stopped production in 1940. The XK120 was launched both as an open 2-seater and roadster at the 1948 London Motor Show as a show car for the new Jaguar XK engine. The display car was the first prototype which looked almost identical to the production cars, except that the straight outer pillars of it's windscreen would be curved on the production version. The roadster caused a sensation, which persuaded William Lyons (Jaguar founder and design boss) to put it into production. Starting in 1948, the first 242 cars had wood-framed open two-seater bodies with aluminium panels. Production switched to the 1cwt or 51kg heavier all-steel in early 1950. The "120" referred to the aluminium car's 120mph top speed, which made it the world's fastest production car at the time of its launch. In 1949 the first production roadster was delivered to Clark Gable. Ultimately the XK120 became available in two open versions, first as an open two-seater known in the US as the roadster, then as a drophead coupé (DHC) in 1953; and in 1951 also as a closed, or fixed head coupé (FHC). On May 30, 1949, on the empty Ostend-Jabbeke motorway in Belgium, a prototype XK120 achieved an average of runs in opposing directions of 132.6mph. In 1950 and 1951, at a banked oval track in France, XK120 roadsters averaged over 100mph for 24 hours and over 130mph for an hour. In 1952 a fixed-head coupé took numerous world records for speed and distance when it averaged 100 mph for a week. Roadsters were also successful in racing and rallying.

The first roadsters, were constructed between late 1948 and early 1950. Beginning with the 1950 model year, all subsequent XK120s were mass-produced with pressed-steel bodies. The DHC and FHC versions, more luxuriously appointed than the roadsters, had wind-up windows and also wood veneers on the dashboard and interior door caps. With alloy cylinder heads and twin side-draft SU carburetors, the dual overhead-cam 3.4L straight-6 XK engine was comparatively advanced for a mass-produced unit of it's time. With a standard 8:1 compression ratio it developed 160bhp, using 80 octane fuel. Most of the early cars were exported; a 7:1 low-compression version, with consequently reduced performance, was reserved for the UK market. The Jaguar factory provided roadsters with the higher compression ratio to the press. Journalists could test the model's optimum performance in Belgium, on a long, straight stretch of road between Jabbeke and Ostend. The XK engine's basic design, later modified into 3.8 and 4.2 litre versions, lasted until the late 1980s. All XK120s had independent torsion bar front suspension, semi-elliptic leaf springs at the rear, recirculating ball steering, telescopically adjustable steering column, and all-round 12'' drum brakes that were prone to fade. Some cars were equiped with aluminium finned drum brakes to help overcome the fade. The roadsters lightweight canvas top and detachable sidescreens stowed out of sight behind the seats, and its barchetta-style doors had no external handles; instead there was an interior pull-cord which was accessible through a flap in the sidescreens. The windscreen could be removed to replace it with aeroscreens. The drophead coupé (DHC) had a padded, lined canvas top, which folded onto the rear deck behind the seats when retracted, and roll-up windows with opening quarter lights. The flat glass 2-piece windscreen was set in a steel frame that was integrated with the body and painted the same colour. Dashboards and door-caps in both the DHC and the FHC were wood-veneered, whereas the more spartan roadsters were leather-trimmed. All models had removable spats covering the rear wheel arches, which enhanced the streamlined look. On cars fitted with optional centre-lock wire wheels the spats were omitted as they gave insufficient clearance for the chromed, 2-eared Rudge-Whitworth knockoff hubs. Chrome plated wire wheels were optional from 1953. In addition to the wire wheels, upgrades on the Special Equipment version (called the M version in the United States) included increased power, stiffer suspension and a dual exhaust system. 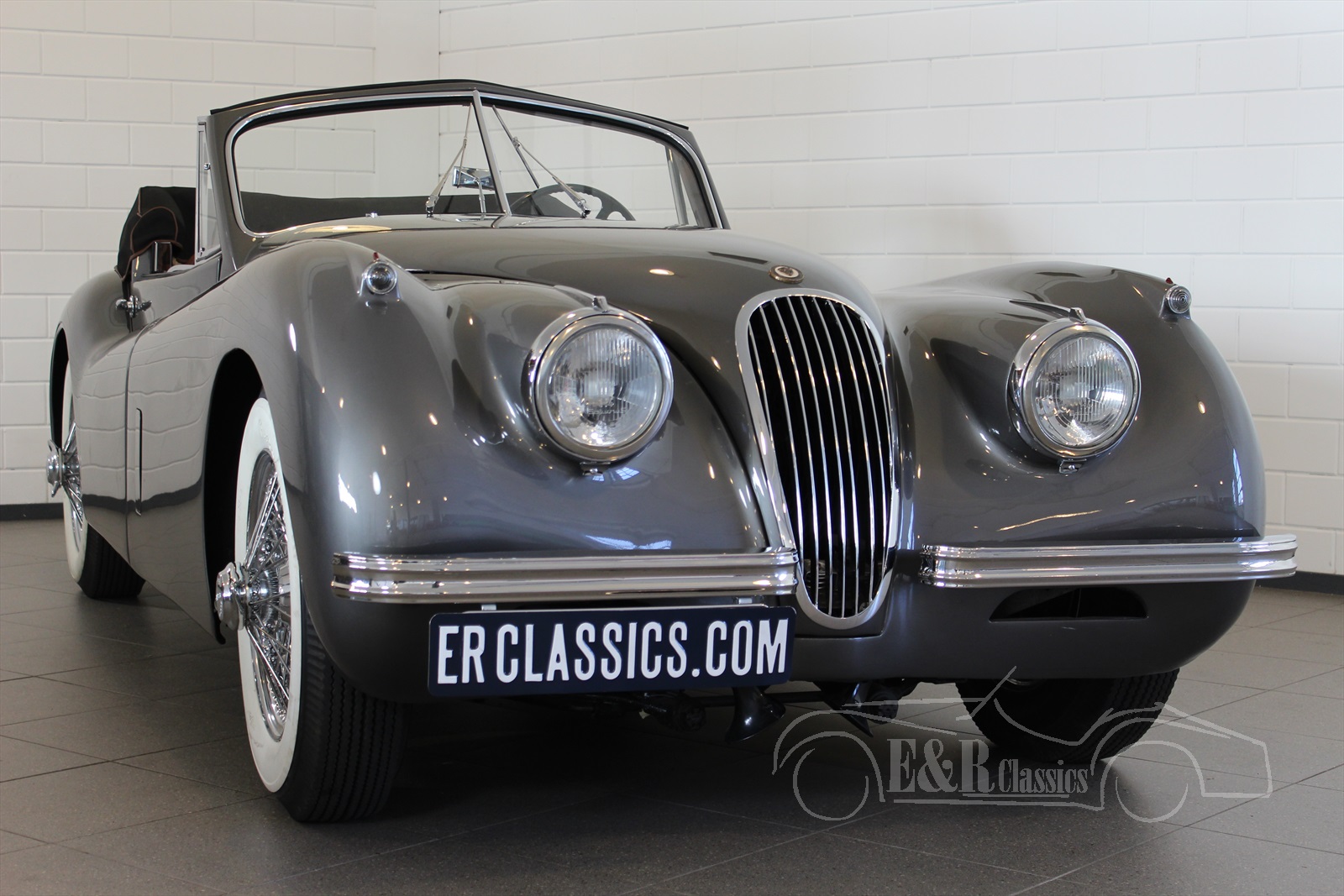